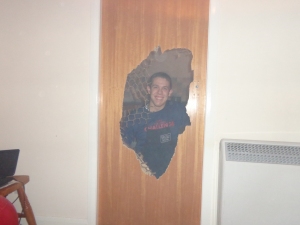 This week has been quite a lot of fun!! Very different from normal missionary work cause of the Holiday Season.
So we had Zone Interview Training on Saturday, which is always amazing. I love meeting with President Brown. We had some great training on being more accountable for what we do and serving others, with a purpose! I always love our training meetings, they really do help and get us excited about the work!
I spent Monday cleaning our flat, and then went down to Dundee on exchanges with Elder Mills. That was a lot of fun! We had district meeting on Tuesday (New Year’s Eve) and Elder Grant trained us on praying as we work, and throughout the whole day. Praying is always very important. I notice a huge change when we are continually praying for help and guidance throughout the day!!
Then, New Year’s Eve came around………..
Because of my previous workplace, I thought it’d be fun to try and fry some chicken and have chicken sandwiches. So I prepared the chicken, breaded it and everything, and heated a pot of frying oil. It got pretty hot, so I threw some chicken in. It got pretty smokey, so we opened some windows to let the smoke out, and we walked out of our tiny kitchen cause the smoke was bad. A gust of wind went through the windows and shut the kitchen door. Now, Normally, this would be okay, right? Just open the door and go back in the kitchen? Well, unfortunately, our kitchen door doesn’t have any door handles…So, we got scared. We could hear the oil getting bubblier and we were worried that a fire was going to start. So we tried to find some things to stick through the door to open it, and we just realized it wasn’t happening (keep in mind this is all happening in 1-2minutes) and so we concluded that the only thing we could do, was kick the door down, and take the oil off the stove. Soooo….we kicked a hole in the door! I walked through, and took the pot off the heat, saving the day.
haha so that was a fun experience, I’ll always remember that New Year’s eve!! Luckily, one of our investigators happens to have the exact same door that he took off a long time ago. So he’s gunna give it to us, and everything will be all good. We did what we had too, and didn’t want our flat building to burn down! haha 🙂 Well We’re just thankful that we’re all safe. It was definetly a fun experience though! Oh, and the chicken sandwiches…they were alright 🙂
New Year’s day was fun. We were supposed to go out with a less active member and fly some hawks and Peregrine falcons, but he never called us back. So we took a long bike ride down the countryside of Scotland and went to a place called Lunan Bay. There’s an old castle there that got destroyed, and the boy and sand and everything was really pretty. It was amazing! Then we went to a member’s house for the evening.
It’s been a very fun, and very different, past two weeks, but I’m excited to get back into the work!!! some good things are coming up here in Arbroath.
Have a wonderful week everyone, and Happy 2014!!!
Love,
Elder Starr

Well, it’s been 3 days since I last emailed you guys, and not a lot has happened!! So this will be a short one 🙂
On Thursday we went to a family called the Watson’s for dinner. They are such a fun family!! And they also invited a new couple in the ward over for dinner, and I found out that she used to live in Higley!! (back when there was actually a Higley) I told her that Higley got swallowed by Gilbert, but she remembered a lot about the area and went to Higley Elementary in 2005! She also thinks that the McLean family from our stake has visited them here in ScotlandWhen they picked up their older brother! Crazy how small of a world it is 🙂
So On Friday we tried by a lady who was sleeping, so that didn’t go to wel. Then we did some tracting and some service at the British Heart Foundation. Then we tried to visit a man in our ward who has been in the hospital for a knee replacement since Christmas, but it turns out he’s still in the hospital cause his knee won’t stop bleeding

but they think he’ll be alright!
Then we had dinner at Grandma’s. I’ve told you guys about her, right? She makes us call her Grandma, but she’s a member and she really treats us well. It’s always fun going over there! 🙂
Saturday was a full day of chapping(tracting)..We met one nice old lady who seemed a bit interested, so that was good. We don’t get to talk to a lot of people here and it’s kinda sad

But the people are out there waiting for us!! 🙂
Then on Sunday we went to church, had fast and testimony meeting, which is always fun, and then when to Bishop’s for dinner. I love going over there, his wife is such a could cook!!
Well, I think that’s about all for this week. Hope you guys have a wonderful week, and try not to let the Spirit of Christmas leave just cause it’s over!!
Love,
Elder Starr 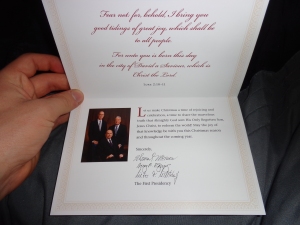 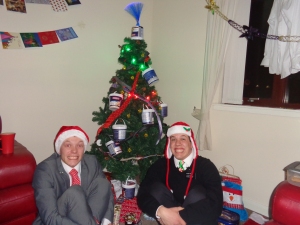 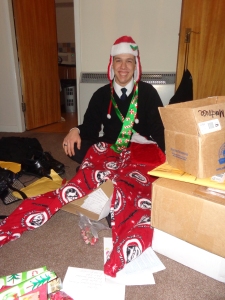 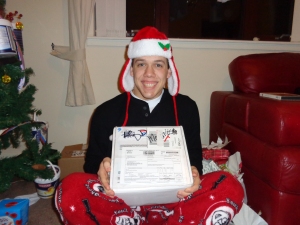